In the horror comedy Zombieland focuses on two men who have found a way to survive a world overrun by zombies. Columbus is a big wuss — but when you’re afraid of being eaten by zombies, fear can keep you alive. Tallahassee is an AK-toting, zombie-slaying’ bad ass whose single determination is to get the last Twinkie on earth. As they join forces with Wichita and Little Rock, who have also found unique ways to survive the zombie mayhem, they will have to determine which is worse: relying on each other or succumbing to the zombies.

Here’s the 2 second sequence used for the Zombieland trailer:

I’m in the process of getting the VFX sequence at the beginning of the film uploaded, so stay tuned for more!

We rendered out some stills of the initial Globe animation that has been playing at the end of the Zombieland trailer for the below poster design: 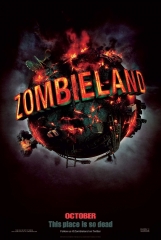